The total area covered by the world’s cities is set to triple in the next 40 years – eating up farmland and threatening the planet’s sustainability. Ahead of the latest Urban Age conference, Mark Swilling says it is time to stop the sprawl

I have just spent two days in Barcelona, one of the most densely populated urban settlements in the world. There are 103 road intersections per sq km – high compared to Brasilia’s 41 or Shanghai’s Pudong area, which has only 17. Yet despite these high densities, residents of Barcelona will tell you how profoundly liveable their city is.

Visitors are charmed by the pedestrianised streets that thread their way through a maze of buildings constructed over the centuries – between four and seven storeys high, on narrow streets leading to piazzas where people sit at cafe tables or under shady trees. Many residents walk or cycle to work, and public transport functions very well.

For the first time in human history, most of us live in urban settlements – from megacities of 10-20 million, of which there were 28 in 2014, to medium-sized cities of 1-5 million (417 in 2014), and smaller settlements (525 of between 500,000 and one million people in 2014). Looking ahead, the biggest growth will occur not in megacities but these small- and medium-sized cities.

Metropolises expand and contract. It is estimated that 40% of Europe’s cities are shrinking (though this is a trend that migration might help to reverse). Even in Africa, there are some countries where the percentage of the total population living in cities has declined at various times over the past two decades.

Overall, however, our current urban population of around 3.9 billion is expected to grow to around 6.34 billion by 2050, out of a total global population of at least 9.5 billion. If we continue to design and build as if the planet can provide unlimited resources, then this near-doubling of the urban population will mean a doubling of the natural resources required to build and operate our cities – which is not sustainable.

As cities grow, perhaps our most serious concern should be how they expand out into the surrounding countryside. Contrary to popular belief, over the past century urban settlements have not only expanded demographically, they have also sprawled outwards – covering some of the world’s most valuable farmland in the process.

The result has been a steady de-densification of urban settlements, by about –2% per annum. Even where inner-city areas have densified over the past few decades (Copenhagen, for example), the citywide trend is still for an overall reduction in average densities.

In 2010, the total area covered by all the cement, asphalt, compacted clay, park areas and open spaces that comprise the footprint of the world’s urban settlements was around 1 million sq km. In comparison, the total area of France is 643,000 sq km.

If the urban population and long-term de-densification trends continue, the area of the planet covered by urban settlements will increase to more than 3 million sq km by 2050. And since the most intensively cultivated farmland is typically located near where the bulk of the food is consumed, much of this additional 2 million sq km is currently our most productive farmland.

In short, continued urbanisation in its current form could threaten global food supplies at a time when food production is already not keeping up with population growth.

A key determinant of rampant urban sprawl – especially in North America, where it is a particularly serious problem – has been the existence of cheap oil. When oil prices reached record highs in 2008 and exacerbated the global economic crisis, the people who travelled furthest tended to be the first to default on their mortgage payments.

As their fuel expenses for travelling to work and school rocketed, so their capacity to afford urban sprawl drastically diminished. Visiting Detroit a few weeks ago, I found that of the city’s 300,000 buildings, 70,000 currently stand empty – and mostly derelict.

From the 1960s onwards, the city built more and more ring roads to suburbanise the middle and upper classes into the surrounding countryside – and in the process bankrupted Detroit’s urban core, leaving it unable to manage the economic impact of the closure of its once-giant car factories.

Indeed, most of the extra 2.5 billion people who will be living in urban areas by 2050 will be in cities of the global south, in particular in Asia and Africa; 37% of all future urban growth is expected to take place in only three countries: China, India and Nigeria.

Other than in China, rapid urbanisation in these developing counties has resulted in an explosion of informal urban settlements, or slums. In India, millions of slum-dwellers live within the core urban areas, creating the fairly unique Indian phenomenon of neighbourhoods where the urban poor and middle class live together.

By contrast, in African cities – where 62% of all urbanites are in slums – the majority of slum-dwellers live in expanding urban settlements on the peripheries of cities. With Africa’s urban population (currently around 400 million people) expected to triple to 1.2 billion by 2050, this form of urbanisation will result in massive, sprawling, relatively low-density urban settlements across the continent.

But it’s not happening like this everywhere. Take Ethiopia, an east African country of 99 million people with one of the fastest growing economies in the world. While 80% of the population is still rural, urbanisation is accelerating fast, placing huge pressures on the capital, Addis Ababa.

Government investments have turned this city into a massive building site. Endless cranes are silhouetted against the African sky as a huge number of relatively high-rise buildings emerge in the urban core.

At the same time, with funds and expertise provided by the Chinese, a light-rail system has been built that runs across the city – a remarkable feat in a city where 80% of the population lives in slums. This creates incentives for the middle class to live in high-density, multi-storey apartments that are starting to spring up around the stations – reducing the need to subsidise longer-distance, road-based travel by private car.

Coupled with the building of multi-storey, subsidised housing for the urban poor (some located close to transit nodes), the result is that Addis Ababa is densifying, setting an example for what is possible in other cities facing similar challenges.

Johannesburg, the largest city in South Africa, provides a very different – but also promising – case study. Under apartheid, the urban poor were forcibly relocated into outer-city settlements – often located between five and 40km from the urban periphery. Many of these turned into slums as population numbers far exceeded what these settlements were designed to accommodate.

After democratisation in 1994, there was a major inward flow of people into the urban core that could not be accommodated, despite a massive housing construction programme. Land invasions took place in all South African cities, including on inner-city land.

Johannesburg’s metropolitan government realised it could not build an integrated city by moving millions of people around, because so many already lived in formal townships. Instead, it identified a set of strategically located urban development hotspots, and then invested in mass transit services to link them together.

The aim is to rapidly intensify job and residential densities in these development hotspots, thus increasing the number of people who can access publicly funded mass-transit services.

This will increase average densities over time, and integrate the city via transit rather than expensive residential relocations. This, coupled with strategies to upgrade informal settlements rather than building new houses on the peripheries, has contributed significantly to enhancing densification, rather than encouraging the sprawl promoted by Johannesburg’s property developers and banks since 1994.

There is no doubt that sprawling, de-densifying cities are a major threat to the future sustainability of the planet. Neither the UN’s sustainable development goals nor the Paris agreement’s climate targets will be achieved if this challenge is not addressed – but it means going up against property developers who tend to prefer greenfield developments on the peripheries to the complexities of brownfield regeneration.

Across the world, it would be a mistake to focus solely on improving the average densities of cities. Los Angeles has a higher average density than New York, for example, yet LA is regarded as a dysfunctional urban form while NY is functional, because it comprises a network of high-density neighbourhoods interconnected by efficient and affordable mass transit systems.

Seoul is similar: a megacity that has avoided sprawl with this approach. When the mayor decided to dismantle the eight-lane highway that used to run through the centre of the city, he said: “Seoul is for people, not cars.”

An alternative road was not built – resulting in an increase in the number of people using mass transit which, in turn, made mass transit financially viable. Building more highways for cars, then introducing trains and buses in the hope that they will be financially viable, simply does not work (the greater Johannesburg region is learning that lesson now).

China, meanwhile, has urbanised hundreds of millions of people over the past three decades. This has tended to be in high-rise, multi-storey buildings located in “superblocks” with wide, traffic-congested streets and few intersections per sq km. The result is relatively low densities in neighbourhoods with virtually no street or community life – in short, not the kind of urban area one would call liveable.

Compare this with the neighbourhoods you find in Barcelona, where buildings are five to eight storeys high, located on narrow streets with pavements, trees and small piazzas for social engagement, and all well connected to both motorised and non-motorised forms of transport. 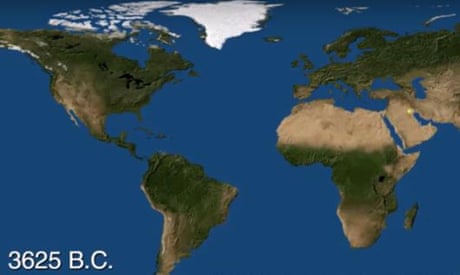 The rise and fall of great world cities: 5,700 years of urbanisation – mapped

This is what makes for liveable urban neighbourhoods. China has realised its mistake, adopting an urbanisation strategy that breaks away from sprawled-out superblocks in favour of a high-density neighbourhood approach, with narrower streets, a high number of intersections, and improved public transport.

While the population of the world’s cities will likely double in size between now and 2050, rising oil prices and carbon constraints make urban sprawl increasingly untenable. Eradicating it in favour of liveable, accessible, multi-centred, high-density cities should become a shared global commitment.